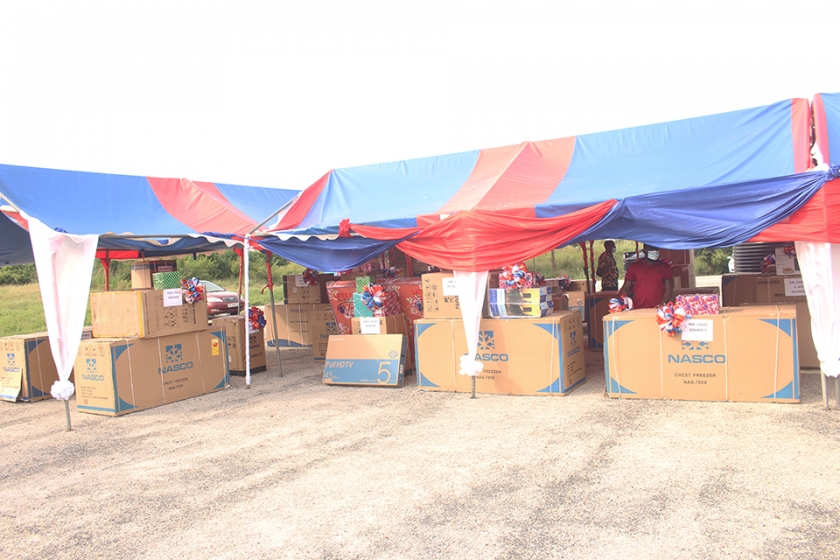 Some assorted farewell packages for the pensioners

Chairman for the occasion and the 4th Vice-Chancellor of UEW, Rev. Fr. Prof. Anthony Afful-Broni, who himself was part of the group in his remarks, inspired his colleague retirees to come to terms with the reality that life is now beginning for them. “None of you should go about thinking that you are retiring and therefore, you’re getting ready to die. As for me, I am not thinking about death at all; life is now going to begin, hallelujah!”

He hinted that he had previously advised retirees to come together to form an association but appeared they kept on procrastinating adding, he would ensure that the association is formed now that he is on retirement. “I am going to be the founding member of UEW Retirees’ Association.” 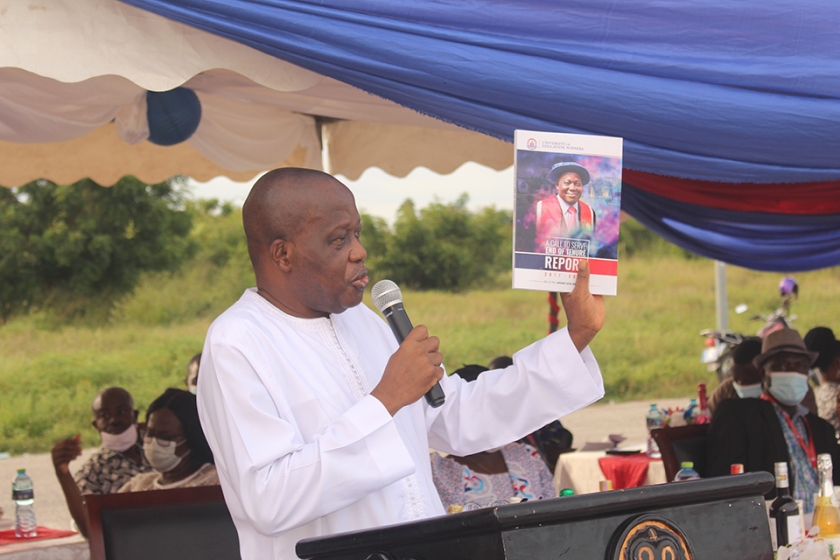 Rev. Fr. Prof. Afful-Broni also used the opportunity to highlight his end of tenure report as outgoing Vice-Chancellor of the University.

The Deputy Registrar, Division of Operations, Mr. Alexander W. Essah, welcomed the retirees and their well-wishers and also revealed the purpose for the ceremony on behalf of the Registrar, Surv. Paul Osei-Barima Esq. He gave context to the trajectory of UEW in terms of staffing, student enrolment, infrastructural development and other achievements.

“By whose effort has the University reached this far? The efforts and the contribution of you and I. For you, the retirees, some of whom have even spent 20 or more years; some 15, 10 and in all these years you didn’t sleep. You put in your efforts; you have contributed your quota and the University cherishes them so much,” he remarked. Mr. Alexander W. Essah lauding the efforts of retirees during their service with the University

Prof. Yaw Ameyaw, who expressed gratitude to the Management of UEW on behalf of his colleague retirees, drew attention to the fact that the older an individual gets, the slower the individual becomes in executing tasks.

“What I mean is that everybody will go to the grave. The same thing applies that one day in your life you are a worker and on the other day, you will retire. We thank Management for this honour that they have done to us. It has been a long journey in our lives to get to the age of 60. Prof. Yaw Ameyaw thanking Management and UEW for the honor bestowed on them during the farewell ceremony

“You should listen to the voice of the Lord as you journey through life. You should ensure that your relationship with human beings becomes very cordial because creation was based on relationships. If you deviate from the relationship, then you would not be on the path of God,” he advised.

Prof. Ameyaw entreated his colleague retirees to know and get closer to God as they move through the post-retirement period. “We will never forget this occasion. It is a great day; it is a wonderful day in our lives. We appreciate everything and as we move out, I think this shouldn’t be the end of us. We are ready to help when the need arises because the work of man never ends until the individual closes his eyes. Let us live together peacefully on this campus; let us see the University as a special entity God has given to us and uphold it so that there will be love and unity,” he stressed.